There are a total of 15 investment options to build your portfolio. It's a mix of stable value funds, bond funds and large cap, mid-cap and small cap funds.

The shaded column Default Funds are the accounts that are "set it and forget it". Your money auto defaults to one of these accounts based on your date of birth and adjusts accordingly as you get closer to retirement age to be more conservative with your investments. 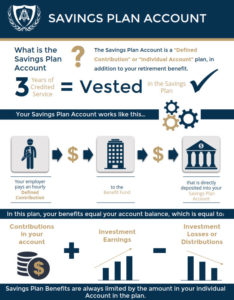 "Vesting" means you remain entitled to your Account in the Savings Plan, regardless of whether you continue to work in Covered Employment until retirement.

You are "vested" in your Basic Account under the plan if you:

Credited hours that fall into two categories will only be counted once.

You are an "Eligible Employee" who can participate in the Plan if you fall into one of the following categories.

You may need to sign an authorization for the transfer of contributions pursuant to a reciprocal agreement.

You can lose your Savings Plan Basic Account if you leave work with the employers who contribute to the Savings Fund or become "inactive" before you have vested. You will be considered an "inactive" participant if you have less than 200 Credited Hours during any Plan Year.

If you are not vested in any part of your Account under the Plan when you become an Inactive Participant, your Basic Account will be cancelled. If you return to Covered Employment before a Permanent Break (five consecutive Plan Years with less than 200 hours), your Basic Account will be restored. If you become an Inactive Participant after vesting, you will retain your Account and continue to earn investment income on your Account until it is distributed. You will not have the same retirement options as Active Participants. Your distribution options must follow the rules as outlined in the section on Termination of Employment.

If you become an Inactive Participant before you are vested in your benefit and if you remain inactive for five (5) Plan Years, your Savings Plan Basic Account balance will be permanently forfeited. If subsequently you return to work in Covered Employment, your Basic Account will start from zero and will only be credited with new contributions.